The Ministry of Public Health's Department of Health Service Support plans to push Thailand as an international dental hub, as announced by Government Spokesperson Thanakorn Wangboonkongchana in a press release on June 12.

According to him, this initiative follows Prime Minister and Defense Minister Gen. Prayut Chan-o-cha's order "to stimulate national economy and generate revenue through promoting Thailand as world's medical and dental hub" in a bid to attract foreign tourists with these services.

Wangboonkongchana added that the promotion of the medical industry is not only for generating revenue, but also to create more employment opportunities and boost related industries in the country. Medical hub is among Thailand's five new S-Curve industries, along with robotics, digital, aviation and logistics, and biofuels and biochemicals, whose promotion shall help grow the economy.

"Under the policy to promote Thailand as dental hub, cosmetic dentistry will be highlighted, and service rates will be set as one-price policy," the release read. "In preparation for the implementation, a central database and an application will be developed, as well as the interpretation center, payment mechanism, dispute resolution system, and related facilitation system...”

The pilot program is expected to launch in Phuket province and interested dental clinics who want to apply may do so in the third to fourth quarter of 2022. 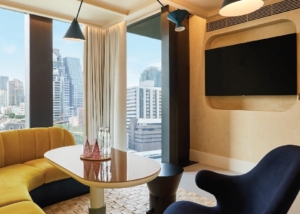 The Standard to Open Flagship Hotel in Bangkok on July 29

“Get ready for one of the most highly anticipated hotel openings of the year!” The Standard said. Topgolf is taking a shot at Southeast Asia, and its sights are set on Bangkok. Opening in August 2022, the Topgolf Megacity branch is situated beside the Mega Bangna mall in the Bang Phli neighbourhood of Samut Prakan. Inflation in Thailand has surged to a new high since a 14-year record, increasing by 7.6% in June from a year ago, faster than the 7.1% rate seen in May. Bangkok is the Best City in Southeast Asia, Report Says

Travel + Leisure has named Bangkok as the best city in Southeast Asia, while Singapore and Danang came in second and third.