What to Eat During Por Tor (Hungry Ghost) Festival in Phuket

What to Eat During Por Tor (Hungry Ghost) Festival in Phuket When a person dies, Thais believe that one of two things will happen: either they will reach nirvana or they will be reborn or reincarnated. This traditional belief by the Chinese Hokkien community is associated with the merit-making event namely the Por Tor or Hungry Ghost Festival in Phuket, Thailand.

This year, the festival is expected to commence on Aug. 12. The event occurs every seventh month of the Chinese lunar calendar, hence, the actual date may fall between the months of July and August.

The province of Phuket comprises multicultural people such as Buddhists, Chinese, and Muslims, 30% of whom are Thai Chinese who migrated during the 19th century. Because of this, the official ceremonies typically take place in various Chinese shrines located throughout Phuket.

Legend has it that the “soul of the hungry ghost” resented the dead, so Chinese families thought of compensating them, including deceased family members, with food offerings and by burning incense.

Part of the family tradition is to prepare a plate of rice for each of the deceased relatives and place a stick of incense next to it. When the incense has been completely consumed, it means the ghosts have finished their meals and the living members may start eating.

Despite its seemingly dark theme about death and ghosts, Phuket’s Por Tor Festival is brimming with classic Chinese-influenced comfort foods that remain popular up to this day.

Turtles symbolise long life and strength, plus the colour red indicates good luck. During the Por Tor festival, the turtle cakes, also known as Ang Ku, is the most popular type of food offered as a sacrificial offering. It is believed that anyone who makes an offering of turtle cakes to their ancestors will have a longer life span.

Ms. Vipada "Kee" Thongpinyochai is the owner of one of the most well-known red turtle cake shops in Phuket, which has been operating for more than a century. Every year, locals come to their shop to order red turtle cakes worth THB10,000.

Red turtle cakes are made from glutinous rice flour with syrup. The cake is moulded in a wooden container shaped like a turtle (comes in all sizes), while the reptile’s legs and tail are created using food colouring.

Just like any ordinary cake, the red turtle cake will be decorated with the family or company name along with well wishes for happiness, good health, and fortune. The written decorations are also made from sticky flour mixed with food colouring, while the packaging has a pink ribbon tied to it.

Traditionally, families bring the turtle to the temple to pay their respects and then take it home, while others give cakes to the temple which will be donated to families in need.

In Chinese culture, the tradition of serving a whole roasted duck is meant to symbolise prosperous new beginnings that will last throughout the coming year. Roasted pig, on the other hand, represents prosperity, generosity, and indulgence.

During the Por Tor Festival in Thailand, both are displayed on the banquet table because they represent wealth and extravagance. This is done in order to appease the spirits of the deceased ancestors and to express gratitude to them for guiding the family throughout the previous year.

Fresh produce can typically be found for sale at Phuket's local markets, also known as talad (in Thai). When most shoppers at the market are locals and there are only a few tourists in the vicinity, you will know that you are shopping at one of the best markets.

During the Por Tor Festival, some of the popular veggies used in Thai dishes that you should buy are morning glory, bamboo shoots, bok choi, Chinese cabbage, broccoli, lady fingers (okra), small peas, and larger varieties of eggplant. Your Gastronomic Guide to Having Brunch in Bangkok

Have a relaxing weekend at one of these opulent brunch spots in Bangkok where you can have a sip of a good cup of coffee and indulge in a hearty meal. 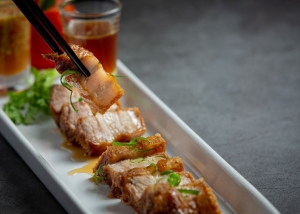 Sample Filipino Fare and Culture in These Restaurants in Bangkok

Are you a Pinoy living in Bangkok and longing for home or a Thai curious to sample Filipino cuisine? These four restaurants are for you. Where to Find Authentic Thai Basil Chicken in Bangkok

It’s a perfect one-plate meal for foodies who are always on the go.