It’s past 10 PM and the crowd goes wild. Bar hoppers dance, shout, and drink as speakers blast at full volumes. The performers enter the scene with full makeup on and clad in loud outfits. Tonight, they are the queens, but instead of a crown, they wear a wig. Welcome to a drag show, the gayest performance in live entertainment today.

The history of drag shows goes as far back as the 1920s, where extravagant performances among the gay and lesbian communities dominated the streets of Harlem. Today, however, drag shows and the faces behind them have penetrated markets originally considered conservative. This is partly thanks to the adoption of mainstream media with shows like “RuPaul's Drag Race.” Aside from splits, lip-synching, and over-the-top dresses, drag shows are about self-expression and acceptance of people in all shapes and sizes. And yes, straight people are welcome, too!

In Bangkok, the LGBTQ+ community and their allies held a Pride Parade early in June 2022, the first of its kind since 2006 in the Buddhist-dominated country. While the fight for equality has a long way to go, Thailand is making strides in creating a welcoming and inclusive space for all gender orientations. To cap off our Pride Month celebration, check out these three bars where you can catch drag shows in Bangkok.

It’s hard to miss this lively bar on Silom 4 when talking about gays and drags in Thailand. The Stranger Bar & Lounge is the brainchild of “Drag Race Thailand” contestant Miss M Stranger Fox and Irish Sean Lestrange. The bar has made a name as the go-to in Bangkok among the children of nightlife. A pandemic survivor, The Stranger Bar & Lounge is now alive and kicking again with carnival-like performances from famous Thai drag queens such as Sriracha Hotsauce, Zymone, and Meannie Minaj. You can catch its happy hour everyday until 9 PM. Performances usually start at 9:30 PM.

Founded by Pangina Heals, the so-called drag mother of Thailand, House of HEALS features fierce and bold shows by the country’s top drag acts. You can catch their performances on Wednesdays (Throwback to ‘90s), Fridays (Friday Slay Night), Saturdays (Dance Till You Drop), and Sundays (Future of Drag). Their regular performers include Meannie Minaj, Dearisdoll, Annee Maywong, Gimhuay, and the queen herself, Pangina Heals.

Formerly called Dreamboys, Dreamboy Paradiso is one of the gayest bars in Bangkok with a crowd being a mix of young and old expats and tourists. Its new location in Patpong Soi 2 has a smaller stage but is no short of fun and lively acts. Performances kick off at 9 PM, with the final show at 11:30 PM. Thailand’s beauty and cosmetics industry is not falling too much behind Japan and South Korea. If you’re looking for a gateway to enter the Southeast Asian market, these trade shows and conferences in Bangkok might help. From Tourism to Dog Shows: June-July 2022 Events in Thailand You Shouldn’t Miss

Thailand is starting to relax their health and safety restrictions, which means many activities are now pushing through at full capacity. Here are some events in Thailand this June and July that you might be interested in. 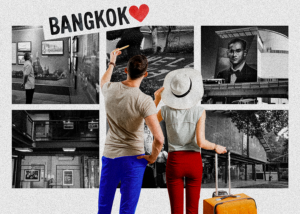 Traveling on a Budget? Check Out These Free Things to Do in Bangkok

To help minimize your expenses, this article put together a cheat sheet of the things you can do in Bangkok for free.