Hong Kong’s first and only dedicated beer shop, Craftissimo, has cured a cult clique in its nine years of infancy born on the streets of Hong Kong, now existing as a metaphorical light in Tai Ping Shan to its moth-like lovers who flock to the shop daily from 1 to 11 PM for a refuel of more than 280 types of beers, ciders, and natural wines.

Recently opening a second store on the hip Haven Street in Causeway Bay, the local craft beer brand is set to alight the city with a favour and passion for craft beers in all its corners.

The Beat Asia sat down with general manager Timo Calder to quiz the man behind the operations about his daily musings with Craftissimo, expansion of the leading craft beer store, what craft beer means to him and Hong Kong, and the brand’s future.

Tell me a bit about yourself, Timo. What has your professional career looked like in the U.S. and Asia? What drew you to Hong Kong?

“I grew up in Brooklyn, New York. I have lived in Asia since I graduated from college in the U.S. in 2010. After graduating, I did a fellowship called Princeton in Asia which sent me to teach history at secondary school in Singapore for more than two years.”

“So since then, I’ve focused on education in my career. I lived in Beijing for six years as well before moving to Hong Kong in 2019. I visited Hong Kong probably 20 times in the past decade, so it was a place I knew well, and I always thought of it as the perfect place to end up. The usual things drew me to Hong Kong — global hub, nightlife, beaches, hiking, food, etc., but I didn’t know at the time that it was also a hub for craft beer.”

Have you always had a special relationship with craft beer? What do you like about craft beer?

“I was lucky enough to be exposed to craft beer from early in my experience with beer. Growing up I had a friend who was this perfect combination of anti-mainstream and nerdy researcher. While some of my friends were drinking Bud Light and Olde English, he was drinking Dead Guy, Arrogant Bastard, and Sierra Nevada. Growing up in Brooklyn, I’ve always had a fondness for Brooklyn Lager, and they are very well established in Asia, so I’ve always been able to find them.”

“I love craft beer because it starts with a strong DIY, homebrew foundation, which when you scale up leads to a lot of creativity and experimentation. Beer doesn’t have the constraints of tradition like wine, so we have seen breakneck innovation.”

What made you take over at Craftissimo?

“My friends and I started as consistent customers. It was a place that we loved to hang out because of the chill al fresco vibes and beer selection you couldn’t find anywhere else.”

“At one point we heard from Ronnie, the founder, was getting married, leaving HK, and was looking to do something else. As a friend group, we made a pretty quick decision to make an offer to take it over and go in together as co-owners.”

When you started, was there a need to introduce international craft beers to Hong Kong? What do you think of the craft beer scene in the city? What improvements can be made?

"We see ourselves as serving all these equally important demographics. We see ourselves as educators and we want to welcome people into the space. The biggest problem that craft beer has is that it can be esoteric and intimidating, and it seriously lacks diversity. We want to fight against that and bring people into fold in every interaction we have.”

What success have you seen with Craftissimo?

“Obviously, the past year or so since we took over has not been easy in Hong Kong. We are lucky because we are retail so we haven’t been hit as hard as many other businesses who had to fully shut their doors.”

“But we have seen a lot of regulars ship out and we think that people are just drinking less in general, staying home, and saving money. That all being said, we are very excited for the future in HK. The city will bounce back as it always does, more people will come back to HK and we look forward to many fun times ahead.”

What does the future look like for Craftissimo in Tai Ping Shan? Causeway Bay? Other chain stores?

“We recently opened our second location called Craft Haven on Haven Street in Causeway Bay and our goal is to continue growing. We look to local examples like Dough Bros and Feather and Bone.”

“We are aiming to be the craft beer equivalent. We have such an amazing and loyal following and we want to continue to build that community. We will make sure Craft Haven is established first but then we will look to more up and coming locations like Quarry Bay or Sham Shui Po.” Sip Back and Relax: Five Wining and Dining Events in Hong Kong This August 2022

Attention, wine lovers and wine-curious. Don’t miss these five wining and dining events this August for your next pour decision. Lawry’s The Prime Rib delivers a comprehensive romantic experience of American fine dining, set with a prime rib cut designed to rival the best steak in the city. 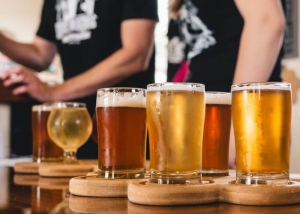 Which Hong Kong Craft Beer Should You Try Based on Your Personality?

Take our quiz below to find out what craft beers you should reach for, courtesy of the city’s best breweries of course.