Do you spend too much time scrolling over new recipes to try and craving for appetizing food snaps on Instagram? We’ve got you covered! Here’s a list of some of the most famous Asian chefs with mouthwatering recipes and excellent culinary skills you should check out.

One of the best female Asian chefs you should follow on Instagram is Bee Satongun. She is the ambassador of renewed Thai cuisine for her impressive creations, techniques, and authentic flavors.

Satongun is the owner of Michelin-starred Paste Bangkok Thai Restaurant, which recently opened another branch in Laos. Her avid followers love her Instagram photos featuring traditional Thai foods, royal Thai recipes, and even her dining experiences from all over the world.

Founder of Momofuku Noodle Bar in New York City, David Chang is one of the Asian chefs you should follow on Instagram. Chang bagged numerous recognitions including Esquire’s Most Influential People in the 21st Century and was the first chef to get featured on PBS television show. His cookbook Momofuku is a New York Times bestseller.

Because of his innovative take on cuisine, Chang has been credited for the rise of modern Asian cooking by sharing his culinary insights on Instagram and podcasts. He is also one of the producers of Netflix’s original documentary, Ugly Delicious.

Celebrity Chef Vikas Khanna is one of the Asian chefs you should follow on Instagram because of his remarkable and inspiring journey. His rags-to-riches stories made him “India’s favorite chef.”

At present, Khanna is based in New York where he is thriving as a cookbook writer and filmmaker. He has been featured on different TV shows such as MasterChef India, MasterChef Australia, Twist of Taste, Hell’s Kitchen, and The Martha Stewart Show.

One of his most famous dishes is the Kandhari Paneer with a modern twist that earned a Michelin award.

With more than 59,000 Instagram followers, Janice Wong is a Singaporean chef, culinary stylist and photographer, author, and visionary. She has been named Asia’s Best Pastry Chef in 2013 and 2014.

Wong is famous for her innovative desserts, edible art installations, and unconventional artworks. She is also the brains behind the progressive desserts of Singapore-based 2am: dessertbar.

Filipino chef JP Anglo or also called Chef Jayps is another celebrity Asian chef you should follow on Instagram. Aside from his popular dishes, chef Jayps also posts funny and entertaining content to delight his 206,000 online followers.

Hailing from Bacolod City in the Philippines, Anglo was named Tatler Dining’s Champion for Philippine cuisine in 2020 for his culinary talent. He also owns a popular restaurant in the country, Sarsa, with several branches around Metro Manila.

His Instagram feed features photos of palatable recipes and adorable snaps of his three children.

Former food and drinks editor of SCMP, Susan Jung reflects on her 25 years of work eating the best of Hong Kong food, and her new book, “Kung Pao and Beyond.” 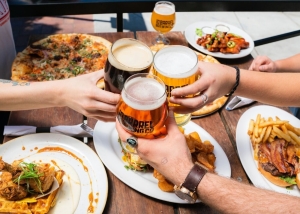 Happening every first Friday of August, International Beer Day is a worldwide celebration that honours one of the world’s most favourite alcoholic beverages. Here are some Hong Kong bars where you can celebrate!

Enjoy some decadent snacks and desserts amongst the skyscrapers at one of these handpicked spots. Ramato assumes the location of its former JIA Group trattoria, 208 Duecento Otto, with a menu designed to celebrate the warmth of south Italian recipes and plates.