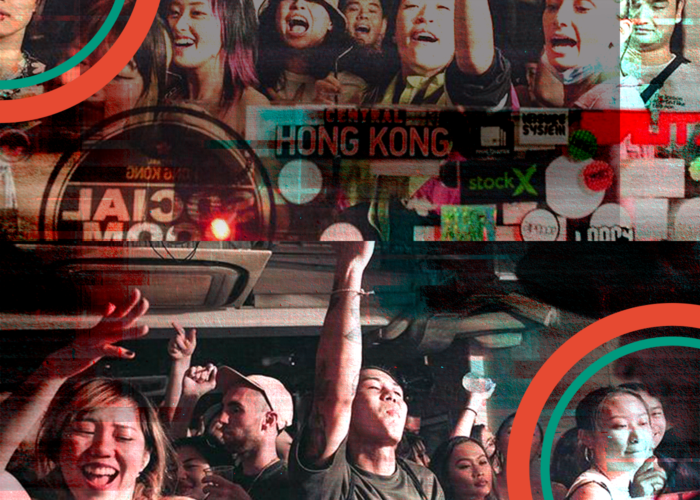 Inside Social Room: The Hub for Hong Kong's Underground Dance Music and Vibes

Hidden in a nondescript building outside a daytime dai pai dong on Stanley Street in Central is Social Room, Hong Kong’s unofficial home for underground music, the dedicated space for the city’s growing DJs and big names since 2016.

Social Room was founded by Hem Gurung, a long-time F&B guru of Hong Kong’s nightlife scene, and veteran Hong Kong DJ, Ocean Lam, who specializes in techno and house, with the sole principle of giving underground music for the people.

“We wanted a cultural exchange and bring some fun to the people on the dance floor,” Ocean told The Beat Asia.

The Social Room has two distinct yet conjoined areas. A relaxing bar area with cushy reclined seating welcomes ravers and diners, before a large dancefloor space with a full-sized DJ booth ushering in the good bass.

In the daytime, it is a bright and cosy lunchtime venue with cushy brown couches and exposed brick wall, for a moment of tranquillity beyond the rushed streets encircling the escalators; in the night, the space transforms into a heartbeat of pounding music and flashing lights.

Any Friday or Saturday night, dozens of people pile into the rustic exposed-brick and dark venue to listen to Hong Kong’s defining or up-and-coming DJs specialising in underground music, be that techno, house, drum'n’bass, trance, electronic, grime, dark bass, deep tech, bassline, and jump up.

Social Room was the brainchild of the mind and people behind Bassment, a small and intimate home on Lyndhurst Terrace for Hong Kong’s bass-lovers and techno and house DJs.

Created in 2010, Bassment ran for five years as an alternative club to the flashy champagne-popping venues hosting 100s in Lan Kwai Fung and Soho. With an anti-EDM agenda and a drive to provide a space back to the community for events more than music, Bassment filled a void in the scene for a community that wanted a dedicated home for techno and house in the city.

Bassment was a third of the size of today’s Social Room space. “We could only fit in 75 people at a maximum for events, it was small and restricting. We were a creative space in the weekdays and a techno and house home for Hong Kong in the weekends. We just wanted to help the community,” Hem said.

Hem describes the early 2010s as the “golden period of techno and house in Hong Kong.” Big promoters such as Small and Tall, Push, and Cliché Records would routinely hold events packing 800 to 1,000 into stellar parties. “There was a solid crowd and Hong Kong brought a lot of big-name DJs from abroad to the scene.”

“We are now seeing a downhill of techno and house because international artists no longer come here,” possibly as a result of the 2019 protests and ongoing COVID-19 pandemic.

“The new generations aren’t serious about techno and house, which is sad, they like good party and vibes in my opinion. The newer crowds want music, but the vibe of an event or party is more important.”

After Bassment closed in March 2015, the team behind the venue, Ocean and Hem opened Social Room, a larger project, albeit in a quieter area of Soho, that had bigger dreams for a larger community space for underground space.

Prior to Social Room, “there were only one or two clubs that focused on underground music. The scene was very small. Oma was definitely the place; I was almost there every weekend and the crowd was open minded and always ready for something new. Then Social Room opened,” said Ocean.

The space was envisioned as a gathering place for Hong Kong’s DJs specializing in funky techno, house, and drum’n’bass, an alternative take on nightlife in the city. Opening to a crowd of 200 people on a Friday night in March 2015, a stress was put on the music quality: spinning tunes live for a live crowd, feeling the bass and vibes of the audience.

Former promotions director of Social Room, Emily James, envisioned the venue to take on various forms and purposes, both as a night-time attraction for the city’s bass-hungry individuals and a versatile daytime venue for dining, wining, and art.

“We [had] taken the vibe from the original venue and transformed it to a new, bigger space in a slightly off-the-beaten path area,” Emily said.

“Our scene now has a venue that can hold more than 100 people comfortably. The space is also versatile enough that it can be used for private and corporate events, pop-up art installations, etc.”

The focus for Social Room’s distinct “music policy” was to pull the underground sounds and DJs from Europe, North America, and Asia to Hong Kong to serve a hungry Hong Kong scene, and homing the city’s growing talent pool of DJs.

“You won’t hear anything commercial or remotely EDM-like at Social Room.”

With Social Room, there was a dedicated effort to do and be different.

“The same group of 500 to 600 people go to the same parties and same events in Hong Kong’s techno and house scene on the weekends. We can’t expect to capture that crowd all the time,” Hem said.

“So, we diversified. Starting last year, we began to adapt our style of parties – techno, house, drum’n’bass, trance, trap, hip hop, afrobeat's. Now, we are the party space for music lovers.”

Not only does Social Room host Hong Kong’s biggest alternative music DJs, but is a musical space for an opportunity for new DJs in the industry seeking to test their love and passion for music.

“The nightclub scene is mostly reliant on Fridays and Saturdays [to generate revenue]. With the property market [in Hong Kong] as stupid as it is, employing the space of Social Room throughout the entire week made sense.”

Former-architect-turned-IG-foodie Epicurus has made waves in the vibrant food scene in recent years. We sat down to discuss his journey with food in Hong Kong. We sat down with content creator Gladys Lo-Reynolds to talk about motherhood, being a Hong Konger, raising a Eurasian family, and Instagram. A Day in the Life of a Disney Imagineer

Isabel Caruncho walks us through what’s it like to work at the “happiest place on Earth” – Hong Kong Disneyland. Jewel Jam: Bringing That Extra Shine to the Parties