Vegan pizzas, although called such, are not just reserved for those already living a plant-based lifestyle. Devoid of meat and other animal byproducts like dairy and eggs, vegan pizzas make for great comfort food for people who may be intolerant of lactose, and those looking to lessen their meat consumption or just simply want a healthier option.

These vegan pizzas in Metro Manila are not just mouthwatering and indulgent, but also guilt-free in principle. Don't knock them until you've tried them.

This pizzeria's pies are all the things we love: sourdough, vegan, and baked in a brick oven! From these qualities alone, we know Pizza Plant's not fooling around when it comes to offering the best vegan pies in the metro. It currently has three branches, namely in Katipunan, Quezon City; San Juan City; and Bonifacio Global City.

Pizza Plant primarily uses Plant Creamery vegan cheese for its pizzas, soy protein for its Italian sausage and chorizo toppings, and cashew milk for its bechamel sauce. While you will find classics here such as Margherita, Pizza Bianca, and Four Cheese, there are also flavors like Wild Mushroom Pizza with Onion Marmalade and Sisig Pizza.

Another pizzeria whose vegan pies you shouldn't miss is Crosta. Its first location was at The Social on Ebro Street in Poblacion, Makati, but it has now moved to Salcedo Village, with three more forthcoming branches in Molito Lifestyle Center, Ayala Alabang; San Juan; and Ikea at the Mall of Asia.

True to its tagline "pizza for all," Crosta serves both sourdough-style meat-based and vegan pizzas to its patrons. Its vegan pizzas make use of cashew-based mozzarella, Beyond Meat sausage and patties, and Omnipork sausage, among others. For first timers, we recommend the Vegan Shroomed Out – a pie made of cashew-based mozzarella, shiitake, portobello, and button mushrooms, and garlic confit – and the Vegan Meatless Lover topped with Beyond Meat.

Scorched Pizzas is a home-based vegan pizzeria operating from Parañaque City. Off the bat, we were taken by the gorgeous leoparding on Scorched's pies, as well as its ingenious flavors such as the Vegan Shawarma Pizza. Did we mention it also offers plant-based lasagna?

Scorched Pizzas is open from Tuesday to Sunday and accepts pre-orders every day. Simply send the pizzeria a private message on Facebook or Instagram for orders.

The Sexy Kitchen by B

Vegan pizzas are just one category of the various food you can order from this plant-based kitchen. Besides its pies, The Sexy Kitchen by B whips up plant-based burgers, pasta and noodles, wraps, appetizers, and Pinoy favorites like Plant-Base Kare Kare, Jackfruit & Mushroom Sinigang, and Sisig. Even if you aren't craving for vegan pizza, you're sure to find something delicious from this kitchen.

The Sexy Kitchen by B is located at Makati Central Square (formerly and popularly known, still, as Makati Cinema Square) along Chino Roces. It also has an online shop for easy ordering.

A post shared by The Sexy Kitchen by B (@thesexykitchenbyb) 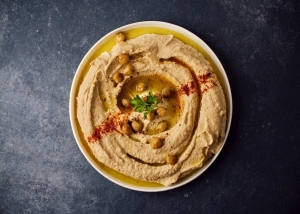 Where to Find Creamy, Nutty Hummus in the Metro

Homemade or store-bought, you just can't go wrong with hummus. Get this hearty dip from these places in Metro Manila! These four restaurants in Metro Manila serve pho, so you don't have to fly to Vietnam to slurp your own bowl! 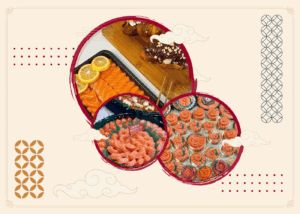 Salmon Party at Home: Where to Order Salmon Sashimi Delivery in Manila

Gone are the days when we have to order pricey salmon at restaurants. Many brands in Manila are now offering fresh salmon sashimi that deliver right at our doorsteps! 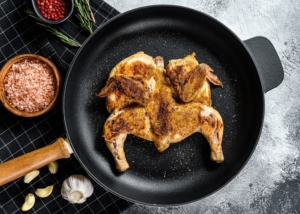 How to Properly Roast Chicken Through Spatchcocking

If you’re unfamiliar with the term, it simply means cutting a chicken open so it lays flat on a surface.