For vegans and those trying to get into veganism, one of the challenges involved is finding places that serve not just good, but hands-down impeccable vegan food. And this trickles down to desserts, too. Because who wants to eat plain ice for dessert? Not this vegan.

Nowadays, vegans in Singapore are spoiled for choice as there are a handful of establishments where you can find the best vegan desserts in the city-state, from cookies and cakes to tarts and brownies! Here are some of them that you should check out!

We recommend Locaba for special occasions as it specialises in vegan cakes! You'll love its menu as it features an extensive roster of treats, from its Vegan Tiramisu and Vegan Hazelnut Chocolate & Blackberry Cake to its Vegan Matcha White Chocolate Cake, Vegan Soft Cookies, and Vegan Apple Crumble in a jar, among others. If, like us, you can't choose just one (how cruel is that?), then go for its 3 Slice Vegan Cake Sampler, which comes with its bestselling vegan cakes, priced at S$32! We promise you won't regret it.

You know there's a lot of heart involved in Roa's cakes when its origin story stems from founder Jane Tan's love for her goddaughter Emma, who’s allergic to eggs, dairy, and intolerant of gluten, and her desire to create a delicious and beautiful cake for her. Roa specialises in chocolate cakes, all of which are gluten-free, dairy-free, and eggless.

It is most famous for its Midnight Grand Chocolate Cake, which comes in flavour options like original dark chocolate, mint, or citrus. This avocado-based cake comes with three tiers of fluffy dark chocolate sponge cake, layered with chocolate ganache, and enveloped with chocolate, edible gold flakes, and Moroccan rosebuds! A six-inch cake is priced at S$68.80.

Delcie's has been around since 2009 and is pretty much a household name when you think about vegan and healthy cakes in general. Even if you aren't vegan, it has cakes that are diabetes- friendly, baby- friendly, gluten-free, and for those following the keto diet. One of our favourite vegan cakes from Delcie's is the Carrot Pecan Cake, which is both vegan and diabetic-friendly, and consists of a carrot sponge cake with decadent vegan cream cheese and caramelised pecans and carrot chips!

If you want more than just cakes, turn to Lilac Oak, one of our favourites for vegan tarts, brownies, and cookies! Its Twice the Taro tarts are a marriage of black glutinous rice, gula melaka, and creamy taro paste, while its Very Fudgy Raw Brownies are — you guessed it — fudgy, chewy, and just super chocolatey, with some crunch from the occasional raw cacao nibs. This is the ultimate indulgent treat and the best thing about it is you don't feel bad while eating it and after. An order of the brownies costs S$28, while a box of two Twice the Taro tarts goes for S$12! 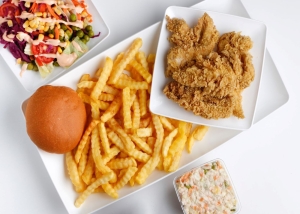 Sometimes you just want fries, buns, baked beans, and steaks without the fuss. For those days, turn to these Western food stalls in Singapore. You Can Finally Try JJ Lin’s Popular Artisanal Café in Singapore on Sept. 30 Angie's Oyster Bar & Grill in Singapore imposes a S$10 surcharge on the final bill of diners for screaming and disruptive children. Whether you’re a local looking for a good grub or a tourist who’s up for a gastronomic adventure, we’ve listed here the top dining establishments that offer chilli crab in Singapore.