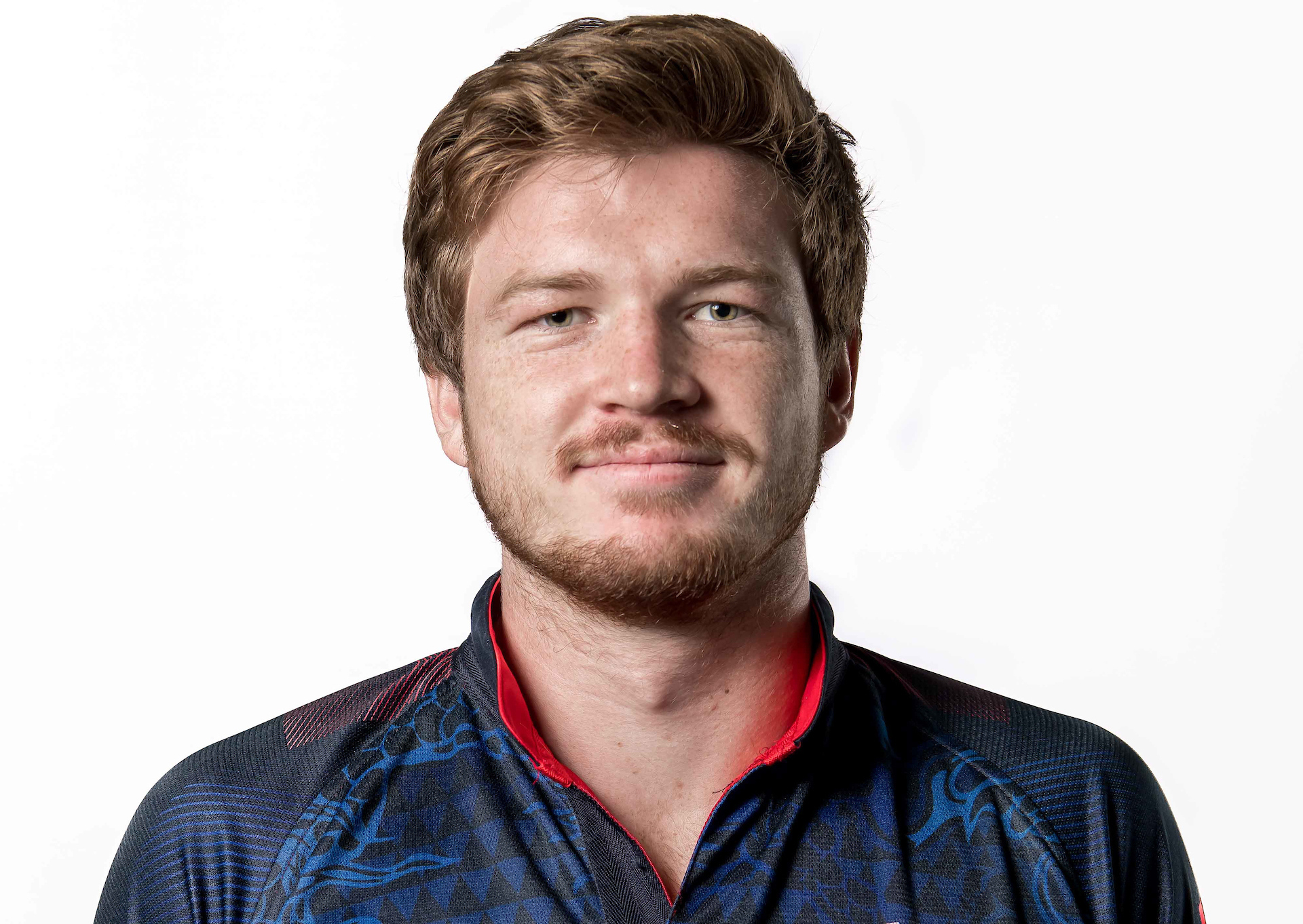 Liam Herbert, 23, graduated in 2016 from South Island School in Hong Kong with one goal: to represent Hong Kong on the global rugby stage.

After receiving the DHL Impact Player award of the tournament at the recent Edmonton World Rugby 7s Series, Liam’s dream has realized, with his eyes and mind set on playing in the 2022 World Cup in South Africa and the 2024 Olympics in Paris.

Finishing seventh place at both Edmonton and Vancouver Seven Series and beating powerhouse Ireland, Liam shone as a player of huge potential for the city’s burgeoning national rugby team.

Collectively over this professional career, Liam has accrued 13 caps representing Hong Kong in 7s tournaments. He has been a part of the travelling team to the San Francisco 7s Rugby World Cup in 2018, qualifiers for the 2020 Olympic games, and became a crucial member of the recent team at the Edmonton World Rugby Seven Series tournament.

He finished the Edmonton tournament with a spectacular 15 offloads, 13 tackles, 24 carries, 5 breaks recorded, and joint-second with 44 runs and joint-fourth with 10 tries scored.

Liam was only six, living with family in Happy Valley, when his brother introduced him to the frenetic and fast-paced game of rugby; 17 years later, Liam has represented his adoptive-home country in Chile, Uruguay, the U.S., Portugal, Fiji, the U.K., Netherlands, Singapore, Indonesia, and Canada.

Today, he is a professional athlete at the Hong Kong Sports Institute (HKSI) based in Sha Tin playing for the Hong Kong rugby 7s team. His history and path towards this moment was shaky.

Starting at six years old, and attending an international primary school in Hong Kong, Liam’s father pushed him to pursue sports. He regularly attended the Hong Kong Rugby 7s held at the Hong Kong National Stadium, watching in the stands with his parents and aspiring to play for the national team.

“At South Island School, everyone and all my friends played rugby,” Liam described as the natural attraction to the sport.

However, his often-troublesome behaviour whilst studying South Island School complicated his smooth path to professional success. Playing for the under-14s team for Hong Kong rugby, Liam constantly missed trainings due to laziness or conflicting times with football trainings. He became known as a kid who doesn’t go to training.

Liam got a second chance training for the under-20s team. He attended a training camp held on a weekend that would provide a pipeline chance to enter the Hong Kong team. He told The Beat Asia he got branded a “wasteman” after not turning up to the Sunday training following a friend’s 18th birthday on the Saturday night.

In 2017, Liam was offered a contract to play for the youth team of Aston Villa football club, which plays in England’s top football division, the Premier League. After being forced out of the academy few months after his arrival and feelings of homesickness arising being away from the city he grew up in, his love for rugby persuaded him to return to Hong Kong and pursue a professional career.

After a few years and a new Hong Kong training staff coming in, Liam’s final chance to break into the national team came when he was 18 years old. The team at HKSI were involved and passionate about his entrance into the team, but only if he could grind and shape up his former days of laziness.

Success and a new mind-set followed. After 13 professional international caps for the Hong Kong team, Liam’s dream and dedication to represent the city has become a reality.

In the six years since graduating from South Island School, Liam has played for Hong Kong on a local level for clubs Hong Kong Football and USRC Tigers, regionally in the 2018 Asia Games, and internationally in the 2018 San Francisco Sevens tournament, 2020 Olympic qualifiers, and 2021 Canada Sevens.

Liam says his most important moment of his professional career at Hong Kong Rugby was during an award ceremony in 2019 at Government House.

In November 2019, Liam was given the Medal of Honor by Chief Executive Carrie Lam, an award given to Hong Kongers in recognition of service in community, political, social, and sports service. Liam, alongside his teammates, earned their medal from their participation and winning of the 2018 Asian games rugby 7s tournament in Jakarta.

The Hong Kong 7s team was the first ever in a team sport to win a gold medal representing the country on a regional level at the Asian games.

In response to receiving one of city’s highest public order, Liam said that it “felt pretty amazing to get such a […] medal for Hong Kong.”

He remembers both feelings of amazement and fear as he was elated to travel to the Chief Executive’s residence in Hong Kong to be presented the medal, but was scared about what to actually do when picking it up.

“Luckily,” Liam told The Beat Asia, “I was one of the last guys to go up because we had to bow and shake her hand i[n] a special order.”

“[It is] something no other rugby team has ever got, so [it] was a very special day for rugby in Hong Kong.”

To be eligible to play for Hong Kong regionally and internationally, Liam gave up his British passport in June 2018, two months before the Asian Games.

His biggest current goal? Make it to the Paris Olympics in 2024. The rugby 7s Olympic qualifiers saw Hong Kong narrowly miss out on entrance after losing to Ireland in the knockout stages. He came inured against Malaysia in the qualifiers.

He said that despite emotions running high after losing out on the gold key to Tokyo with “everyone crying and needing therapy,” Hong Kong’s effort in the qualifiers was the best they have played “in a long, long time.”

“Next time we need to beat Japan (the highest- rated Asian rugby team) to qualify [for the Olympics in Paris]; we reckon we’re up to their standard now and we can give them a good shot,” Liam said.

To get this stage and standard, work at the HKSI is regimented and strict. Upper body gym sessions, high speed games, and contact sessions begin on Monday and Tuesday, followed by a recovery day on Wednesday, Thursday’s high-speed sessions, and Friday’s strongman training.

During Hong Kong’s rugby season, which lasts from September to the following March each year, Liam attends club trainings for USRC Tigers in Jordan on Tuesday and Thursday nights and plays on Saturdays in Hong Kong’s rugby club first division.

For his future, Liam will remain in Hong Kong playing rugby for the Hong Kong 7s team and his club football based in Kowloon. During his free time, he coaches the youth team of the DB Pirates. “[It is] nice to give back,” Liam said about helping the next generation of Hong Kong’s finest when we spoke on the topic.

His parents are eager for him to return to the U.K. to live in his former hometown of Guernsey, possibly starting a business to train children in rugby. For now, rugby in Hong Kong is a priority, with the future possibility of studying estate agency and personal training.

Liam currently lives in Discovery Bay with teammate Liam Doherty in a “cheap” two-bedroom apartment. Growing up in Happy Valley with his older brother and parents, Liam says that his move to Discovery Bay eight months ago affords him a calmer lifestyle. Though further away, he is only a 15-minute bus ride to Sunny Bay and a 30-minute car journey to the Hong Kong Sports Institute in Fo Tan, New Territories.

Life is good for Liam right now, he says in our Zoom interview with him in his quarantine hotel. The professional career supplies him with a good salary, he has all-expense paid travel and luxuries for rugby, and allows him to do something that he enjoys.

“Playing in front of a crowd makes me feel awesome,” Liam says.

During our interview with Liam on Oct. 5, 2021, he was on his seventh day of a 14-day mandatory quarantine in the Dorset Hotel in Mong Kok, after returning to Hong Kong from a successful campaign in Edmonton and Vancouver for the Rugby 7s World Series.

His roommate, James Christie, 25, are filling their time with Netflix, easting custom-made meals filled with protein and macros sponsored by the HKSI, and an attempt to “cycle to Wuhan.”

“Our exercise bike in our room is the only source of entertainment for us really. We decided to spend one and a half hours a day, each, to cycle 35 kilometeres. In total, we would ride the 980 kilometeres it would take to ride one-way from Hong Kong to Wuhan,” Liam said in our interview.

An ode to the story that began 19 months ago and now complicates the life of a professional rugby player in Hong Kong.

Whilst Hong Kong is fortunate to not have local transmission of COVID-19 in its borders, the mandatory quarantines from abroad have affected Liam and his teammates mentally and physically.

Participation in the upcoming Asian Sevens Series held in Dubai in November 2021 will require the team to quarantine for three weeks, ending on Christmas Day 2021. The top two team in Asia will qualify for the Rugby World Cup, set for September 2022 in South Africa.

Subscribe to The Beat's newsletter to receive compelling, curated content straight to your inbox! You can also  create an account with us for free to start bookmarking articles for later reading.