A home to towering skyscrapers, bustling financial markets, and a melange of international crowds, Hong Kong is no stranger to an art scene that remains elite in its nature. International art fairs and world-class galleries welcome the best of the best artists from afar to the shores of the 852.

On street level, however, Hong Kong’s eclectic circle of highly skilled graffiti artists paint raw emotion, the intensity of local life, and what the city means to everyone. Grab your Octopus and head down to find the city’s best graffiti work.

Hong Kong-born and raised Lousy, a city graffiti artist that has become synonymous with street culture in recent years in the city, upiquitous with the street conversation from Causeway Bay to Chai Wan, Sai Kung to Yuen Long, his distrinct style has gained momentum in the underground industry, with features at Art Central this year cementing his status as a rising star in the graffiti world.

His style is silly, colourfull and poppy. His symbolic Kissface is exemplary of his "stripped back" style: instantly recognisable, replicable, and telling of a story of love and passion on the street.

They can be seen outside Peel Street’s Uma Nota – featuring a Japanese-Brazilian model with a bouquet of flowers in her hair, an idylic Capri-meets-Hong Kong mural for the Pici Tseung Kwan O, and a Biggie-inspired mural at TMK Rap and Roll on Wan Chai’s Star Street.

Local street artist Alex Croft is behind Hong Kong’s most recognisable graffiti works and one of the most popular local attractions. His Goods of Desire mural, inspired by Greg Girard’s photography book “City of Darkness” documenting the Kowloon Walled City, explores the random jumble of people’s functional interactions with the building.

Alex’s other works covers the streets of SOHO and. Sai Kung with sleek geometric patterns of skyscrapers and tenement buildings that make up Hong Kong’s city identity.

The anonymous and highly secretive OBSRVR is not on the minds of many Hong Kongers, but his zany and hilarious graffiti sketches around town – including “Shark Fin Makes Your Penis Small.” and “One Day My Sextape Will Matter.” – have cultivated a cult following to the artist.

Signed with Hong Kong’s fresh Young Soy Gallery, OBSRVR has his scribble and graffiti work spread throughout the city, and his most recognisable sketches and apparel can be purchased online.

It is not hard to spot the distinctive style of Omacke, the Canadian-born Hong Kong-based graffiti artist who trades his day-time bar job for night-time graffitiing. Catch his snappy works around Hong Kong Island and Kowloon, with cartoon figures dressed in bright reds, yellows, oranges, and greens and masked up – an Omacke signature.

Be sure to catch Omacke’s stickers splattered all around the city’s abandoned shopfronts and power boxes too.

Cathlove’s – known colloquially as the “Stone Cold Eurasian Jane Austen” - art is innately provocative and women-loving, with her brady bunch of curvy and vivacious women painted on corner walls in Sai Ying Pun, NoHo, and Central.

Her graffiti follows the mundane and Chinese-inspired life of Jeliboo, a curvy and no-nonsense girl who loves dressing up in bouncy colours, twerking to hip-hop, and all-around slaying.

Not one two pieces are similar with Wong Ting Fung’s illustrative design. Mastering a selection of pen, ink, brush and paste up to mix up his projects, Wong flexes a combination of the sharpness of Chinese characters – inspired by local motifs around the area – and colours to elevate a once-dull wall.

His most distinctive graffiti creation is his Tin Hau wall, featuring flashy green and reds dominating the wall inspired by the nearby colourful temple, with abstracted Chinese characters “singing bird” and “fragrant flower” to pay tribute to the sights and smells of the neighbourhood.

Gustav Szabo, known by the public and his contemporaries, grew up in Hove, U.K. and studied architecture, before trading his design work for selling out exhibitions In Hong Kong. His personal style employing bright colours and Hong Kong cultural references define him as unique from the rest.

His infamous stencil language is a mural style that you must search out for on the streets across the territory. Using iconography of TAXI stands, Chinese luck symbols, the figure of the IFC, trams, and lanterns, Szabotage brings colours and vibrancy to Hong Kong.

Be sure to capture his graffiti work outside Musubi Hiro in Central, a fiery clashing of waves and faces, his fierce lion painting at Go24 Fitness’ studio in Yuen Long, and his Sai Kung mural dedicated for the 2021 HK Walls competition.

Having previously worked with clients such as Nike, Google, Starbucks, and Footlocker, Hong Kong-born-and-raised Simplebao has made a name for herself in the street and mural art world. Her art style switches effortlessly from earthly and angel-like illustrations of ghouls and ghosts, wacky and absurd cat creations, to colourful steampunk-inspired art.

Her graffiti work, previously covered in Taiwan, the U.K., and Hong Kong’s K11 Art Mall, has found itself on her unique merch series of cranky, happy, and dumbfounded bao-women.

Calligrapher and mural artist Samantha C has designed detailed and pencil-driven murals and artworks in Hong Kong’s malls, on Soho walls, and in graffiti hot spots. Expertly educated in the art of pencilwork and classical calligraphy, Samantha takes her pencil to the page (or wall) and creates murals that elicit Victorian British moods.

Each mural work she has created – found in spots such as Elephant Grounds, lululemon, One Cellar, and Winstons Coffee – has the same unique style and drives authenticity with their ornate curving pencil-drawn lines and bold script fonts. 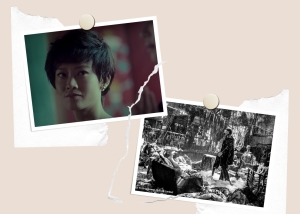