With the advent of streaming services like Netflix, Hulu, HBO Max, and Disney Plus, among others, one would think the movie theatre would be on its way out. But it isn't, and not anytime soon, or ever.

The COVID-19 pandemic may have seen much of the world cooped up at home and Netflix garnering millions more subscribers in the first year of the health crisis, but the pleasure in trooping to the cinemas to watch a film can never be replicated. Since cinemas reopened again in Hong Kong last April 2022, Hong Kongers can now look forward to more cinematic experiences. And yet not all cinemas are the same. The kind of setting, crowd, and atmosphere you're looking for are factors in which movie theatre you'd choose to catch a flick.

If premier, world class, and luxurious cinemas in Hong Kong are what you're after, then you've come to the right place. We suggest you check out these movie houses that offer the best to their patrons, from VIP houses and gourmet treats to high-tech systems and the comfiest of seats.

Leather vibrating seats? Check. A wine bar for some red before or after a movie? Check. PALACE ifc at the ifc Mall in Central is a state-of-the-art cinema, complete with five theatres that have a three-way SRD-EX audio system. Open daily from 10 AM to 10 PM, PALACE ifc is a recommended movie house if you want a unique, fun, and pleasurable watching experience!

Emperor Cinemas operates multiple locations in Hong Kong, but you can't go wrong with its five luxury theatres, including a VIP house, nestled at the Entertainment Building along Queen's Road Central. Emperor Cinemas Entertainment Building promises only the best when it comes to its service, facilities, foods, and drinks, such as reinventing cinema fare into gourmet standard at its very own Roomsbar.

The VIP house, known as the CORONET, boasts of seats with buttons to summon service ambassadors who will serve you fine wine and gourmet treats. The seats also come with a USB mobile charger and sofa seating with a footrest.

MOViE MOViE Cinemas has two locations, mainly Pacific Place and Cityplaza, with the former launching just last May 2020 during the COVID-19 pandemic. MOViE MOViE Pacific Place is all about "the finest moving experience" when it comes to its six theatres, from laser projectors to premium sound systems and ReaID PWS (precision white screen). It also has a wine bar, as well as The Oval Office, a VIP lounge perfect for downing French cuisine and holding a private screening for you and your friends.

MOViE MOViE Cityplaza, on the other hand, offers world class "technologies from the future, including a Braco high-contrast 4K laser projector and RealD Ultimate Screen" for the best cinematic experience. It also has a wine bar and vibrating seats.

Founded in November 1996 and operated by Broadway Circuit, art house Broadway Cinematheque is one of the mainstays of Hong Kong's film scene, serving as a safe space and community for cineastes, filmmakers, and cinephiles to come together and share their love for cinema. Apart from film screenings, Broadway Cinematheque also organises seminars, courses, sessions with directors, and film programs, among others, to promote the vibrant and rich local film culture of the region.

The cinematheque, which has four cinema houses and 460 seats, also comes with a café, bookstore, and disc store.

Other Cinemas to Check Out:

Enjoy some decadent snacks and desserts amongst the skyscrapers at one of these handpicked spots.

These bars may be attached to several of Hong Kong’s most lavish hotels, but they are truly destinations on their own to visit and sip at. 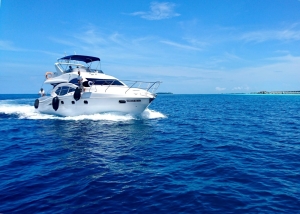 Luxury Yacht Rentals in Hong Kong for a Day at Sea

In Hong Kong, you can realize your yacht dreams thanks to the slew of luxury yachts available for charter.