The great east coast city of New York shares a lot in common with its cousin in Asia, Hong Kong. New York is the food capital of the West, whilst arguably Hong Kong takes first place for the East. Cheap eats with shabby outdoor dining corner Michelin-starred three-course meal restaurants. A simple bodega or dai pai dong lunch can cost no more than HK$50.

Both cities have earned their titles as meccas for food in respect to their waves of immigration brining spices and flavors, local appetite for savory and sweet, and a lust for the delicious at every moment in the day.

New Yorkers in Hong Kong city number to the 1,000s, yet many live more Cantonese and Western in respect to what they eat and chew. But not to worry! We’ve collected the best New York-style delis, restaurants, and cafes to show how you can eat like a New Yorker for a day in Hong Kong!

Since its founding in 2014 by banker-turned-bagel maker Rebecca Schrage, Schragels has been filling the stomachs of upset and home-sick New Yorkers with handmade bagels.

With Cantonese and Jewish-New York blood, Rebecca has been at the helm of Schragels, striving to carry on the tradition of her grandparents’ ventures and operation of Jewish delis in New York in the 1950s and ‘60s, with the bagel recipe passed down to today’s Hong Kong bagel outlet.

Their flagship bagel, a signature rendition of a Reuben sandwich, the SchReuben, blends bagel magic and an age-old New York tradition (bagel, brown mustard, beef pastrami, sauerkraut, Swiss cheese; HK$90). Customers can also customize their plain bagel with the “schmear me” - for HK$50 spreads of plain, honey and pecan, and scallion can be mixed with plain, poppy seed, sesame, onion, and cinnamon raisin bagels.

A must-try for a morning snack popping out of work is the Deli’s New York Style Hot Dog, a beef frankfurter, served with sauerkraut, mustard on a soft sesame bun (HK$ 138), or for sweet tooths, an all-American sugar-packed Signature New York Cheesecake (HK$ 128).

New Yorkers from the Upper East Side, Greenwich Village, and Chelsea sure know what a bagel, pastrami, and a knish is, but real Bronxers know what real sandwich magic is with two slices of bread and a dream filling of choice. Fad Chad’s in Sai Ying Pun is a must and go-to for hungry office workers and Instagrammers on a lunchtime break for classic New York pieces.

A post shared by FAT CHAD’S - a boozy bodega (@fatchads)

The Diner is a classic American diner located at Arbuthnot Road in Central that provides a traditional American experience, albeit the vibe and Nuevo-chic appearance that New York diners in the ‘90s brought to the city.

Their selection of breakfast and brunch items all offer bottomless coffee, named by some weekly patrons of The Diner as the best in the city for a cup of American Joe. Recommended all-day breakfast item is the Breakfast Burrito (HK$108), white bread tortilla, with Mexican chorizo, cheddar cheese, and scrambled egg.

Die-hard New Yorkers and eager fans of the Manhattan deli experience have obsessed over Morty’s Delicatessen ever since its establishment in 2016. Open for all three meals of the day, all meats sold at Morty’s are smoked in-house and cured using family recipes passed down by “Morty’s great grandfather.”

Veterans and fans of the chain laud the 45-day meat aging process that perfects the smoked taste of pastrami. Sold at both Central and Wanchai branches, the signature Classic Pastrami (HK$ 125), including unlimited pickles and a choice of coleslaw, potato salad, french fries, or soup, is highly recommended. The Reuben sandwich (HK$135) is paired with Swiss cheese, thousand island dressing, and sauerkraut, topped on house rye.

Every Monday from 4 PM until close, each location holds The 1K Reuben Challenge, challenging customers to devour an entire 1-kilogram Reuben sandwich (750 grams of meat, pickle, and fries) in under 30 minutes – otherwise a hefty HK$588 is forfeited. Every Tuesday is buy-one-get-one-free for pastrami sandwiches.

Those in desperate need for a drink and pizza at the end of a tough workday, and are eager to venture back into the culture of New York’s gritty and grungy dive bars, should explore PMQ’s neighboring The Pontiac, selling a taste for New York in cheese and tomato and one’s favorite tribble.

Subscribe to The Beat's newsletter to receive compelling, curated content straight to your inbox! You can also  create an account  with us for free to start bookmarking articles for later reading. 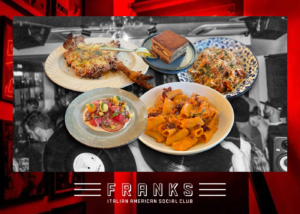 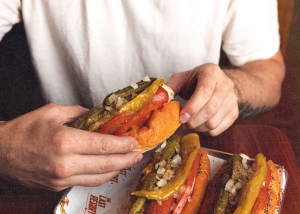