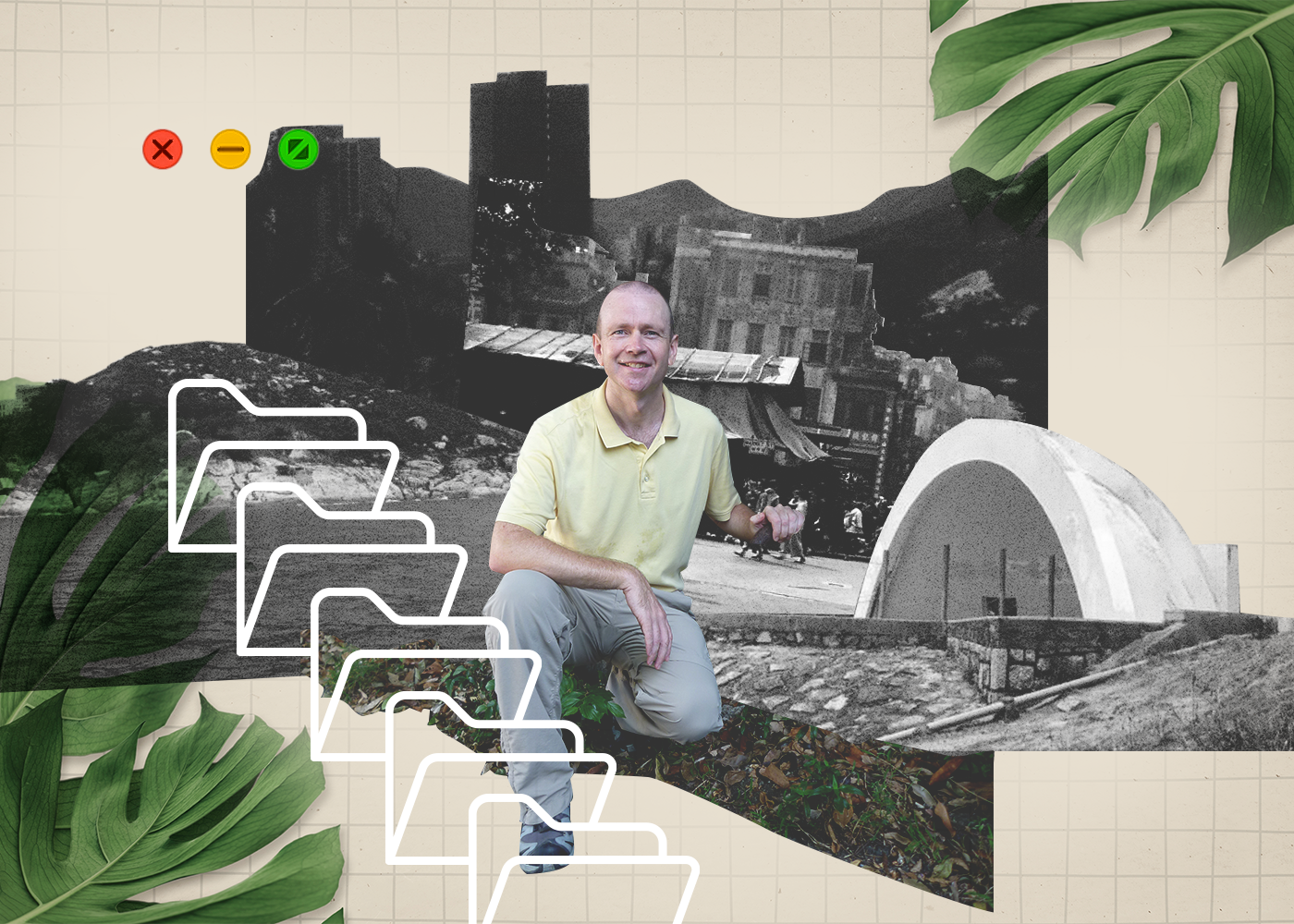 Historian-buff David Bellis is set to celebrate a three-decade long life in his adoptive home of Hong Kong, seas and oceans beyond his birthplace of Wales.

First arriving to the former colonial outpost in 1989 and then temporarily settling in 1992 after time spent travelling in Australia, David’s adoration of his new home in Hong Kong grew, along with his rudimentary grasp of Cantonese he learnt in Sydney.

Seventeen years later in 2009, and with a need to chart the ancient colonial remnants of his new home, David founded Gwulo.com, an online historical archive of over 47,000 pages dedicated to the record of people, places, pictures, and facts of Hong Kong pre-dating the recognisable cityscape today.

David’s website – translating to ancient in Cantonese (古老 gu2 lou5) - originally began as a blog in 2002, titled batgung.com, an earnest platform for the expat transplant to document his life in Hong Kong, alongside friend “Mr. Tall.” “Turns out my life isn't very interesting, so that didn't go very far,” David told The Beat Asia laughing.

Emigrating to Hong Kong with a motivation to continue in a career path of computer science and a life beyond his small town in Wales, the city enthralled David’s attention.

The pair found a healthy mix of documenting both their expat lives and their historical surroundings. In 2004, the first messages on the website’s discussion boards asked readers to chat about their lives in the 1960s of Hong Kong, the city’s wartime history, and collecting old photos of a pre-colonial, pre-modern Hong Kong.

In 2006, David’s programming enabled the site to add photos in its online archive. Two years later, the forum was structured with every page labelled as a historical article, photo, message in a forum, or a place in Hong Kong.

However, users complained a division in the audiences of batgung who would be interested in the “present Hong Kong […] surviving and thriving here” and the Hong Kong of the past.

Seven years following batgung’s birth in March 2009, David posed a question to his readers: Shall we build an online archive catalogue of 170 years of Hong Kong’s history? With batgung already storing over 900 places and 1,800 photos, David sought to ask his followers how to improve on his personal project.

In June 2009, David purchased the domain name of Gwulo.com.

"I'm just curious about what's around me,” David said. “I’m in Hong Kong and what’s around me is Hong Kong and so that’s what I’m looking at. If you picked me up and dropped me in London, I probably [would have started] a website about things I see on the streets in London.”

David explained the principle of Gwulo as an online platform for publishing the hidden historical secrets tucked away beyond our modern surroundings or “little surprises that you can get as you go around.”

“It's very easy to think of Hong Kong as this very modern city; the older bits tend to be the little things overlooked or within a gap between two new things and they somehow survived. When I see them, I'm like, ‘oh, that's curious, what's that doing there.’ I hope that [if] I found it a little surprising, someone else would look at it and enjoy and get a little, ‘oh, that's funny, you know, I'll keep an eye out for that next time.’”

The site began with efforts to archive and record three core facets of Hong Kong history: photos – any pictorial evidence of what life was from the 1840s and earlier to yesterday; places – buildings, neighbourhoods, areas, and ruins; and people – the lives of Hong Kongers over centuries.

“I think the things that most people enjoy are the photos. They’re the easiest way for someone to have an interest in history and [understand] how Hong Kong has changed so much.” From the upload of pictures onto the site - 29,803 photos to be exact at the end of 2021 - places in Hong Kong become easier to recognise and chart on Gwulo’s interactive map and in specific forums.

A project that began a year after Gwulo’s founding aimed to consolidate a wealth of notable Hong Kongers into a database designed for searching, from governors and colonial politicians, traders and marketers, to cultural and religious leaders.

In 2010, David’s team began the long-term “tedious and mundane” transcription project of documenting all 88 years of Hong Kong’s juror's lists covering years 1854 to 1941, in a bid to build the largest accessible directory of former Hong Kongers.

The voluntary contributing team are currently processing the names, nationalities, occupations, and addresses of men and women on the 1938 list.

The 12 year-long project has the potential to bear plentiful of fruit. “We can look up an individual and find their address, link that to a place and find the page for that place. If we know if anyone has posted any photos of the place, we can contact the person’s family to source old albums featuring the place.”

"Now we can upload the photos on the site and close the circle, and it all feeds everything else." In 2021 alone, Gwulo stored more than 3,600 Hong Kong people in its archive.

David’s proudest part of the site is Gwulo’s Wartime Diaries, a project that began in December 2011 as a manner to commemorate the 70th anniversary of the Japanese invasion of Hong Kong. However, David said, “It tends to be low profile on the site.”

The Gwulo team tasked themselves to source several diaries from 1941 to 1945 and split them into daily entries. Readers would sign up for the four-year-long service each December, during the early days of the war, to receive a daily email showing them all that day's diary entries from 70 years ago, following diarists from the primary attacks in Europe, fighting, and Japanese occupation in Hong Kong, to eventual liberation in 1945.

The project began with Barbara Anslow, a regular contributor of Gwulo, who lived in Hong Kong throughout the 1920s until the ‘50s. “Barbara generously allowed us to take her diary recordings in the 1940s during her time interned at Stanley Camp and upload it onto the website.”

Over the years, other late nonagenarians, octogenarians, and living centenarians donated or had diaries passed onto the site to feed the powerful project.

“It's a very slow burn,” David said of the war diary project. “Often, [a diary entry may] not be dramatic, often there was a blackout that day. Some stuff was really boring, but other days will tell of the Americans bombing a camp and so many people have died.”

“The best response has been, my parents or my uncle was in camp and they'd never talk about it and this has just given me a chance to feel what it was like for them. I think you can't get better than that.”

Alongside almost 300 returning contributors to the site, David aims to cater to every regular follower, local Hong Konger, and interested foreigner. “I think if you ask each person, they've all got their own interests.”

“One of the things I get a kick out of is that anything on the site will be looked at by different people and they'll get different things out of it. A tram aficionado will be able to date an old picture by when the style of bumper was added to a tram [featured in the picture] and someone else will understand and date the design of a post-box that happens to be in the background.”

David finds dedicated followers reaching out at least once or twice a year, with older followers who lived in the 1930s and ‘40s, such as Barbara, sharing their personal experience.

“Those are the things that you think if I look back in 20 years' time and someone asks me, what are you most proud about having happened from the website, it's those people that I've had a chance to meet.”

To David, it is not the former Greek-era architecture, boundary markers, archaeological ruins, rare pictures, or the noteworthy Hong Kongers that notably excite him, but every new discovery he can make about the previous Hong Kong people, places, and pictorial evidence.

“It’s very much the magpie approach. It will be the latest sparkly thing that comes along and makes me chuckle and go, oh that's funny and interesting. Often though, this [historical fact] fills in a gap [to uncover a mystery]. We have a giant jigsaw puzzle and a missing piece that links these two people, places, buildings, areas together. That's where the fun comes from.”

This year, David’s top priority is to upgrade Gwulo.com, as the site is expected to see the upload of thousands of articles, pictures, and people forum posts. A live copy of the new website, fit with a new way to tag pictures to better store and locate pictures, is set to release in the coming weeks.

Once the site update is finalised, David is set to introduce themes onto the site to better the user experience. Users will be able to search historical data and information through specific decades, places within specific districts, and navigate Hong Kong during military operations and in wartime.

Late 2022 is when David plans to publish his next book, volume five in a series of engaging photo essay books called “Old Hong Kong Photos and The Tales They Tell”, detailing life in colonial and Japanese Hong Kong through the Gwulo archive.

Gwulo is a full-time passion that takes up most of David's time. The Brit does not possess lofty plans for the site but wants its presence to continually touch followers in Hong Kong and beyond. “Our visitors are in the millions, subscribers in the thousands, contributors the hundreds, and commentors and uploaders in the dozens.”

A few dozen patrons assist with monthly contributions, amounting to just over HK$3,000, to assist the basic operation of the site.

“You wouldn’t retire on it or send your children to Kellet [School] on it (laughs).”

The main message of David’s site is: “Come and join in”. He told The Beat Asia that everyone has something they can add, a little story, or something they have seen around Hong Kong.

Gwulo’s wartime diaries project is updated daily and those interested in subscribing are advised to enter their details here.

A space to read more about Mrs. Barabara Anslow and her life in Hong Kong during the 1920s to the ‘50s can be read in her biography here.

The Beat Asia readers are welcome to subscribe to Gwulo’s free weekly newsletter and purchase his books via Gwulo’s online bookstore. 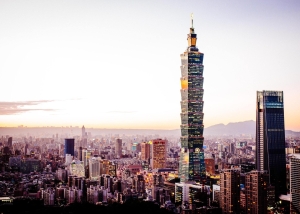 Five City Trips for Your Post-Quarantine Travels in Asia

With the announcement of hotel quarantine ending in Hong Kong, we give you the low-down on the top five city short-haul trips for your post-COVID travels in Asia. Hong Kong Secret Art: MTR Artworks You Might Have Missed

Hidden in plain sight, these gorgeous artworks turn our everyday commutes into fleeting museum visits in between a busy day. 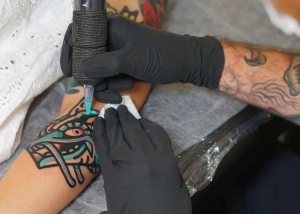 The Coolest Tattoo Studios in Hong Kong to Get Inked At

With no shortage of innovative and daring tattoo artists in Hong Kong, any design or creation is feasible in the hands of the city’s inkers at these cool tattoo studios.