Carbon Brews, Hong Kong’s largest brewery, does not want to play it safe when it comes to creating craft beers for hungry drinkers.

Relocating to their Fo Tan site in late 2020, the employee-driven brewery aims to break boundaries in the craft beer space in Hong Kong and carve its way through a wider Asia market.

The brand of Carbon Brews has spread rapidly throughout the city since its founding in 2018, with its signature logo and creative beer flavours found on shelves and taps in bars, restaurants, and supermarkets.

“We are Beyond Beer,” general manger and “beer dumpster” Chris Wong told The Beat Asia, referencing a need to reinvigorate what beer means to the consumer, similarly with vegan-giants Beyond Meat.

The brewery where Carbon Brews stands today began in 2015 under the operation of Japanese brand Hitachino Nest beer, which markets a selection of Japanese-inspired ales, lagers, and stouts.

Operating until 2018, when the brand withdrew from Hong Kong markets, the main owner of the brewery had a choice to either close operations or start a local Hong Kong brand – leading to the birth of Carbon Brews in October 2018.

“We were extremely fortunate that our owner allowed us to start our own brand. The unique part is we already had a team running a brewery and he allowed us to do whatever we wanted to do as long as it is a cool brand for Hong Kong,” Chris said.

“The original Carbon Brews team sat down in late 2018 to workshop and brainstorm the direction of their new brand, what core product would be brewed, and how ingredients would be sourced. “We decided to come in and start making outside-of-the-box beers. We let the market tell us what the best product is and what products they like.”

“We were able to keep trying and keep pushing boundaries and doing what wasn't available at the market that time with a with a young team.”

With no import tax and custom duties, Carbon Brews can import the “best and finest quality” malts, hops, and yeast from abroad to brew local batches.

“Why we [are] quite proud of running a brewery in Hong Kong,” Chris said, “is the ingredients for brewing are transportable. We use Ferrari-grade ingredients imported internationally and brew only premium products.”

For smaller, speciality beer batches, Chris and the team work with local F&B vendors to source specific ingredients for partnered or seasonal beers. With the release of Carbon Brews’ Cool Beans Coffee Stout beer, the team used Fineprint cafés Peel Street signature Espresso Blend – made up of a Kenyan single origin, Peruvian and an Ethiopian Natural – to craft the beer.

The creation and success of Carbon Brews can be directly attributed to the team's democratic structure.

“When Carbon Brews started, everyone came together, and we voted,” Chris said. Tradition was practiced in principle in the birth of new flavours at the Fo Tan site.

“When we create new products, we have a very extensive ideas submission process. We have a voting system on our labels, beer concept, recipes, and all the way down to the beer name. There is not one founder or boss; everyone is contributing.”

A significant part of the original team from Hitachino days still work at Carbon Brews, with additions made over the years. Brewers, marketing, production, and sales teams hail from Ireland, Germany, Kazakhstan, South Africa, Australia, New Zealand, and Hong Kong.

“The submission process relying on employee-driven ideas and the equal bolts each employee has influenced our brand to consistently bring in new ideas for the Hong Kong beer scene.”

"Because of our very open system we have these really crazy young guys that come in with crazy ideas that we need to consider as part of our brand because that's what we do! ”

From ideation to final product, the process to bring a beer to market is extensive, requiring all moving parts of sales, marketing, brewers, and beer gurus to be involved.

“We have the brewers paired with a member of the sales and marketing team, to create a whole kind of brief on the recipe, history of the beer, target audience, and how to build up this product to complete their dreams.”

“We always try bringing the beer back to something where people are familiar, other than just being outside of the box. We are not making a durian truffle gasoline-style beer!”

With wacky beers sold by Carbon Brew such as a vegan matcha milkshake IPA, Marshmallow Irish ale, and coffee pale ale, there is a constant need to relate to what drinkers in Hong Kong are consuming and current trends.

“We try to make people who do not think they like beer, to get them to try something new.”

Identity for the Carbon Brews brand is important and locating what Hong Kong meant to the team was a goal set out on day one.

"The identity of Hong Kong we wanted to feel is a real Hong Kong that you see every day, not the sailboat, not The Peak, not the tram, no kung fu costumes, but the actual people who live in Hong Kong.”

“What our team see and do in Hong Kong represents what the drinkers in Hong Kong would like to see. Their lives and take in the food creation process [are] what [drive] the brand to create what truly Hong Kong is, a fast-moving city in terms of trends and with the highest quality standards for food and beverages.”

“With our branding, identity, and recipes, we did not want a play on words. [We are] just people in Hong Kong and we brew beer.”

Carbon Brews' identity also stems through the brand’s name and logo. The company’s headquarters and brewery is located in Fo Tan (火炭), which translates to “fire carbon.”. The Carbon logo with intersecting grid squares represents both a detailed commitment to the science of brewing and the “outside-of-the-box" creative thinking required in the process.

“Science comes from nailing down the details, not cutting corners, and not going flashy. The 50% of the art side is stepping outside of the boundaries and getting people to think outside of the beer world.

"With the whole brewing system and the young people we have contributing, we're practically practising this 50% science and 50% art. For me, that's quite amazing, because I can work in a brewery that lives that quote."

Chris and Carbon Brews are optimistic about their future both locally with Hong Kong’s rapidly growing market for craft beer and beyond the region.

“We have set out to be the best brewery in Asia.” Within three to five years, Carbon Brews hopes to expand to markets beyond Singapore, Bangkok, and Tokyo in Europe and North America.

Carbon Brews recently opened a unique brand taproom on Wyndham Street to serve Soho crowds closer to the F&B action, following the opening of the brand’s first ever gastro-pub taproom located in the upscale commercial neighbourhood of Akasaka in Tokyo. 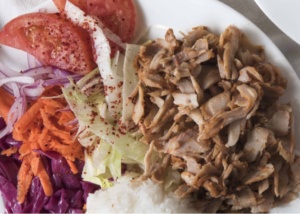 We know you’re hankering for salt and meats when you’re done with your night at LKF, so we gathered the best places to get food after your drunk night partying. Chef Ermanno Lelli immigrated to Hong Kong in 2009, importing a Mediterranean mindset to shake up the city’s F&B scene and vibrant Italian cuisine.